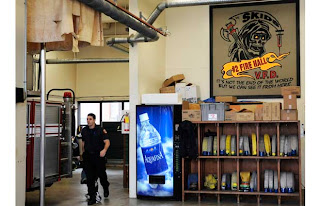 April 5, 2010
The other afternoon I was passing the corner of Powell and Main Streets when I saw 2 firemen standing over a large garden gnome. At first I feared the poor creature had suffered a heart attack, but the paramedics put him on his little feet and all was well. Most 911 calls in the DTES are for services of the paramedic units, rather than hook and ladder crews.
Today, Fire Hall #2 has come under criticism over this poster which hangs inside the building. It was not clear who lodged the complaint; the Fire Hall is voluntarily removing the poster. However should we always just retract what we say because someone is uncomfortable facing the truth? Nothing in that poster is untrue… we have a drug problem in the DTES, and drug related incidents likely account for many of the calls to the V.F.D. #2. True it is not all that is, the DTES and it is not an image we would want the world to embrace. But it is none the less one conspicuous aspect of this community.
To read the article copy and paste the link below. http://www.vancouversun.com/entertainment/Vancouver+fire+hall+mural+removed+after+complaint/2766278/story.html
Posted by AngelsOfTheRoad at 12:46 AM